Archive for the tag “Ryan Anderson”

The Choice Is Now In The Hands Of Anthony Davis 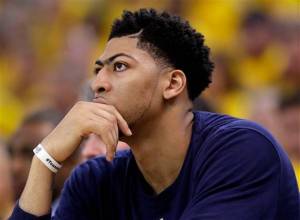 Anthony Davis has to be thinking about this big contract decision coming soon. (photo courtesy of http://www.thestate.com)

The growth of New Orleans big man Anthony Davis has been undeniable. He entered the league as a player with so much promise and not a lot of tape on what he could be offensively. Well, after three years in the NBA, he has shown that he was worth the number one pick, improving each and every season he has been in the NBA. And along with his improvement, the team has gotten better every year as well. This year, they even made the playoffs with a 45-37 record, although they lost in a sweep to the Golden State Warriors. Davis averaged 31.5 points and 11 rebounds or the series against the Warriors and he honestly could have done more if he was given the basketball even more than he was. The future seems bright for the Pelicans as they are a pretty young team and should learn from this experience. But before next season begins, the Pelicans are trying to lock up their most important piece. Reports are surfacing that Anthony Davis will be offered a max contract with the Pelicans that will pay him $140 million over 5 years. Of course that deal would be a no-brainer for anyone else on that team, but what does Anthony Davis want to do?

Davis is definitely still reaching his ceiling. At only 22 years old, he has become a matchup nightmare for many big men in the NBA. And the crazy part is he can still get better with his game. The thing that Davis has to look at before he signs this contract is the team that can be built around him. As the team currently stands, only have five players under contract for next season (Jrue Holiday, Ryan Anderson, Quincy Pondexter, Tyreke Evans and Anthony Davis) and the Pelicans hold a $15.5 million option for guard Eric Gordon that comes off the books. And going into the 2016-2017 season, currently there are only three players under contract (Holiday, Pondexter and Evans). With the salary cap rising in the next two seasons, the Pelicans have some work to do to build the team around Davis. There will be plenty of players that will be available this offseason and next offseason to help the team get better. The question will be are the Pelicans willing to spend money to get better? If history tells us anything, the Pelicans organization, which used to be nicknamed the Hornets, may be willing to stick their foot in the free agent waters a little bit, but they have not been willing to go all-in for the talents needed to take them to the next level.

Chris Paul was once the best player on this franchise. He would routinely make players around him better along with putting his own spin on the games. But over his tenure with the team, it seemed like the organization never brought in players that would complement his star power. The best player that he played with in his entire career with the franchise was David West. No slight to West, but the team needed more than him to make it happen. As a result, the team was never a serious threat in the Western Conference and eventually Paul left via trade for the Clippers. The organization seemed to want to spend money on players that could not make an impact that was needed to take them higher, instead spending money on role players hoping they would take it to another level with Paul as the point guard. Now the organization was under different ownership at that point and time, but there is no indication that this organization will make a good pickup in free agency. If Davis is paying attention to the history of the organization, he should hold off on signing that extension this summer. Of course there is always the possibility that he could get seriously injured next season. But what he should do is make the Hornets prove to him that they are serious about winning. The organization will truly be able to do so if they are serious about keeping Davis there. Then again, if they are not serious about winning, they may bring in some more role players that cannot make as much of a difference. The organization will have an additional $15 million freed up should they not pick up the option on Gordon and that could definitely make some things happen in terms of bringing a great player in to help take the Pelicans to the next level.

Should Davis not sign the contract extension with the Pelicans, there are plenty of options out there available to him. Anyone out there would gladly make room for Davis on their roster. A team like the Los Angeles Lakers would have the contract of Kobe Bryant falling off the books after the 2015-2016 season. Although they have Julius Randle there as their current power forward of the future, Los Angeles would gladly move him to get the next superstar in the NBA. This is just one scenario, but the point is that Davis could easily pick where he wants to play and although he would lose one year on a max contract leaving the Pelicans, he may gain a team that would be more competitive and bring a better situation to his talents. Only time will tell what Davis can and will do, but the smartest thing to do would be to play Poker with the Pelicans. He holds a lot of the cards with his star rising along with the salary cap as well. It should be interesting to see if he actually signs the deal, which he may do, or if he holds out until the following season like Portland Trailblazers forward LaMarcus Aldridge did. And we all see that Aldridge may be leaving the Trailblazers. Could this be the same path that Davis follows? We shall indeed see.

Steph Curry with the three over the outstretched hands of Ryan Anderson and Anthony Davis during Game 3 (photo courtesy of http://www.bigeasybeliever.com)

The Golden State Warriors were the favorite by many to win the NBA title this season. Their combination of precision shooting, tough defense, depth and versatility can be an overwhelming thing to see every game. The Warriors used that combination to win 67 regular season and secure the number one seed this season in the tough Western Conference. Meanwhile, their first round opponent took a little bit different route to the playoffs. Fighting through injuries to key players, the New Orleans Pelicans fought their way into the playoffs. For most of the season, they were battling with the Oklahoma City Thunder and the Phoenix Suns for that eight seed in the West. It took the Pelicans until the last day of the regular season, but they were able to make it into the playoffs as the eight seed. Despite injuries to key players like big man Anthony Davis, the Pelicans were able to keep it together enough to make a run towards the playoffs. Through that experience, it seemed the Pelicans were trying to take that next step in developing. The team was able to make it to the playoffs and their prize for making it was the Golden State Warriors. And you could tell the difference in both teams on the court and not just by their records.

As you watched the series, it was evident who the more experienced team was. That was shown throughout the series when each team faced a little bit of adversity. In the first game of the series, the Warriors were dominating the game. They seemed to be comfortably pulling away from the Pelicans, when New Orleans made an improbable run in the fourth quarter. The game got tighter and tighter as the Warriors were missing shots and the Pelicans were working through Anthony Davis. Then, as the game got tighter, the Warriors did not panic and put the ball back in the hands of their best playmaker, Steph Curry. As a result, the Warriors were able to right the ship in that game and they ended up handing on the series-opening win versus New Orleans. The Pelicans were going to Davis for a while in that fourth quarter, but it seemed like when they got close, they decided to start going to other areas, mainly guard Eric Gordon. As a result, the momentum that was built was essentially ceased by a member of Anthony Davis’ own team. This shows you right there that the Warriors were sure who they were while the Pelicans are still trying to figure it out on the court.

Another example of New Orleans’ youth showing up for them was in Game 3. The New Orleans Hornets were on the opposite side of the coin when it came to 20 point leads this time. The Pelicans had been taking it to the Warriors all night long. It looked like they were going to win their first playoff game and then potentially get some momentum going. But the Warriors took the time to trust their defense, go back to basics offensively and they also hit the offensive boards. They began to chip at the lead of New Orleans Pelicans’ huge lead in the fourth and they eventually would tie the game on a spectacular three-point shot by Steph Curry and send the game to overtime. The Warriors would go on to win the basketball game in overtime. They did everything right in terms of stopping the opponents, knocking down shots and doing whatever was possible to get the win they needed. On the other hand, it seemed as if New Orleans was wilting on the court. The Pelicans got their by allowing forward Ryan Anderson to go to work in the post on whoever the Warriors decided to put on him. That was working well, but it just seemed like they wanted to go a different direction when it mattered the most and Golden State was making their run. Touches to Anthony Davis can always be great things, especially in the clutch. But instead of going to Davis and Anderson, the ball funneled through the hands of guard Eric Gordon. And it was in that last twelve minutes in Game 3 that Golden State won the series and New Orleans lost it.

The experience of losing this series will undoubtedly not feel good for the Pelicans. They played hard and tried to win a game or two while trying to make it competitive all the way through. But the inexperience of their team eventually cost them. They did not know how to close someone out or take it to another level of playoff intensity at all times. On the other hand, Golden State has been in the playoffs before. When tough situations come, they know how to handle those like that of a team that has experienced the playoffs together. And it is because of their collective experience along with excellent ability that they are headed into the next round while the Pelicans are headed home. The experience the Warriors had won out over the inexperience of New Orleans. Hopefully Anthony Davis and the Pelicans will take this as a learning lesson and not as a failure.