Archive for the tag “Bill Cowher” 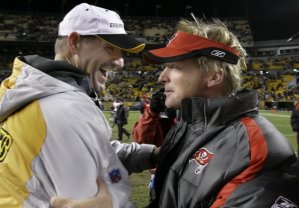 (photo courtesy of the Associated Press)

Unicorns are mythical creatures. Pictures depicted of them show them looking like a horse but with one single horn on its forehead and they are even talked about as being able to fly. The creature, although mythological, is spoken of in regards to good luck. For a creature that has so much good luck attached to it, you would think that it is real. But no one can actually claim to have seen one living, although many have tried to prove the existence of them. That sort of thinking seems to happen around the end of the football season when it comes to coaching searches. Two names are mentioned each and every year with any coaching search that happens: Jon Gruden and Bill Cowher. Each and every offseason, teams convince themselves that these coaches are interested in coming out of the booth and out of commentary to get back into coaching. And each year, the false hope is shut down. This offseason, the rumors have already started about both. The idea of Bill Cowher being interested in the New York Giants head coaching job has been talked about in some circles without him even saying he did or did not want the job. And as for Gruden, his name was mentioned when there was a report that he reached out to the Philadelphia Eagles about their job opening. Gruden quickly shut that rumor down, but it did not stop fans of that team from thinking on what it would be for him to coach their favorite team. When going after these guys, it seems as if they are chasing unicorns. We will never see Gruden or Cowher ever coaching again.

Gruden and Cowher are essentially unicorns. Folks continue to want to convince themselves that they are coming back, but these two are done coaching and who could blame them? They are enjoying what they are doing. Besides, if they wanted to come back, they would want a ton of control. In the NFL, coaches having to wear two hats just does not work. The exception to that rule is Bill Belichick in New England, but many have failed at being coach and general manager. And in the case of Cowher and Gruden, they have not ever worn the hat of a personnel guy. It would be something that could end in a disaster for both of them. But being that they are always mentioned and they feel they have earned it, they could make a ploy for that type of power if they wanted to. Would a team give them that type of power thought? That would essentially not happen. But for them to come back and be NFL head coaches, they would want to have that type of power. And that is one of the reasons they would not be coming back.

Another reason both have not come back is the lack of stress that is involved in their current jobs. With coaching, Cowher and Gruden would go back to a life that is unforgiving on their families and their time. During the season, they would be in the office 60 hours a week during the season, working on gameplans and breaking down footage. And in the offseason, they would be putting in a ton of work breaking down players and running mini-camps. Looking at that type of schedule is way more stressful than what they currently do. Both are very busy during the season, but they do have an offseason they have never had before. Gruden runs his quarterback camp show on ESPN, but that still leaves him the summer to spend time with family, travel and do whatever else he wants to do. As far as Cowher, as soon as the season is over, he is free to do whatever he wants. And for the jobs they do, they get paid very well. The money may be good in coming back to coaching, but the time would be something that would drive both crazy at this point, especially since they have discovered this avenue in their careers.

Eventually teams will stop chasing Cowher and Gruden. Both are the unicorns of coaching at this point. They are done as coaches at this point. But yet teams still continue to speak their names up like they are coming out of the booth or television to do so. This is almost as believable as any of us seeing a unicorn in real life because it will not happen. Maybe teams and fans will want to focus on the coaches that want to coach instead of trying to convince a coach that their team is the team for them to come back to. If both wanted to coach, they would. But that time has passed. They are entrenched where they are right now and that is where they will continue to be.