The Tennessee Titans Take A Chance With The Mike Mularkey Hire 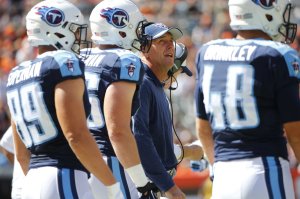 The Tennessee Titans were on the search for a new head coach. They fired head coach Ken Whisenhunt during the season after a 3-20 start to his coaching career there. And he was replaced on an interim basis by assistant coach Mike Mularkey. The interim coach led them to a 2-7 record, as the team played uneven at best. Along with the Titans searching for a new head coach, they were also looking for a new general manager, as they had fired Ruston Webster from that position as soon as the season ended. They were able to find their general manager, but the head coach was still in question. Would they keep interim coach Mike Mularkey, or would they hire someone outside the organization. The Titans interview former Bills coach Doug Marrone and also defensive coordinator Ray Horton for the positon. But in the end, the Titans brass seemed to like one candidate in particular: Mularkey. And on Saturday, the Titans announced that they will be taking the interim tag of Mularkey and naming him the permanent head coach. The veteran NFL coach is getting his third chance as a head coach.

The positive thing about the move is that franchise quarterback Marcus Mariotta likes the hire. It may not seem like a lot, but the youngster is the face of the franchise and you want to make sure he is happy. Keeping Mularkey in Nashville means that there is some continuity there for the offense. Mularkey made some subtle changes offensively when he was named the head coach. One thing he did was try to exploit matchups. If tight end Delanie Walker had a mismatch, Mularkey would scheme the plays to get him open. And the same went for other players that were on the field for the team. Another thing that Mularkey did was use Mariota’s legs more. At the beginning of the season, it looked like Ken Whisenhunt would not use the mobility of Mariota to the team’s advantage. As far as the interim now permanent head coach, he seemed to use his mobility to put pressure on the opponents. And even though the rookie quarterback got hurt, he is still better suited to put pressure on opponents with his feet and his arm.

Even though the continuity is here, there are definitely some concerns. The first has to be the lack of success Mularkey has had when being a head coach. When he was in Buffalo in the 2004 and 2005 season, he posted a 9-7 record followed up by a 5-11 record in 2005. Mularkey ended up getting another shot at being a head coach in 2012 with Jacksonville. And that second shot lasted all of one season. The team only one two games that season and Mularkey was not a hit among his players. He reportedly was so strict on them for no apparent reason and in the end, the ownership decided to move in a different direction quickly. With Mularkey here, the first thing he did was change the days they wear pads in practice. That is not a big change and he stated that his reason for doing so was to make the team more physical here. But what if this is just the beginning of him asserting his control a little too much over the team? We don’t know what to expect on his third head coaching job, but we do know what has happened in the past. And that has not been very good.

Mularkey is getting handed the keys to a franchise, but he will not do well without a general manager that is willing to get pieces in Nashville via the draft and free agency. As much as this team has right now, they need much more. For example, they need to add some pieces along their offensive line. But speaking to the fans, the franchise is not very good right now. The fanbase is starving for some signs of life and maybe a winning record. With the hiring back of Mularkey, many do not have confidence in the organization to get better. Mularkey has a tough task ahead of him here. He has to rebuild a team and win over a fanbase at the same time. He has some good tools to work with in tight end Delanie Walker and quarterback Marcus Mariota offensively. And defensively, he has to hope he can hang on to defensive coordinator Ray Horton and associate head coach Dick LeBeau. Both had that defense improving sans the last two games. The Titans have an uphill climb and it will be interesting to see if Mularkey is able to spark some change or become part of the problem here.